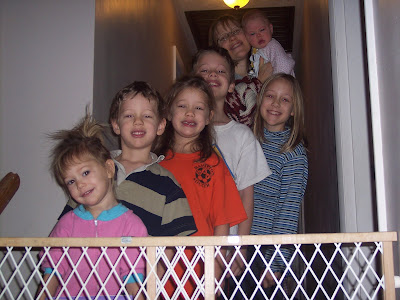 Well that was Christmas! I wish I were more on top of things. We will not divulge all of our New Year resolutions but one of my #1's is to be more effective by being more organized. Christmas Eve I spent running to thr 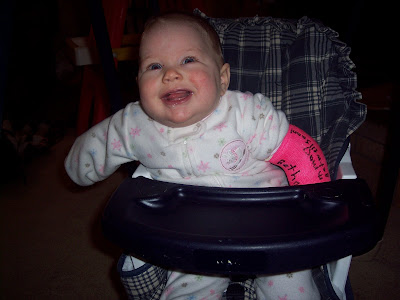 ee different hospitals trying to get help for little Maryann. The Urgent Care took x-rays and said her left arm was broken but nobody would put a cast on it. Finally, a paramedic at Children's Hospital put a splint on. Maryann fusses more now with that big awkward thing on then she did before. I was having the children fold laundry and I was putting away the piles. I left Maryann on the couch and somehow she rolled (which I still haven't seen her do) and fell off the couch. There was a small pile of clothes there to break her fall and she only fell about one foot. I guess she just fell just right - or just wrong - however you look at it. That was a week ago. She seemed fine but fussed every time I put her left arm in a sleeve so I figured something was wrong so I took her in. I feel bad and wish it were me - but then who would put away the laundry. Poor Maryann!

Wesley and I are playing in a soccer league. I love it but it is frustrating when I have an open road to the goal but I don't know HOW to get there. I have never played soccer before and the ball doesn't go anywhere when I kick it if my food actually makes contact with the ball. The team was frustrated also- that is our team, the other team didn't bother playing defense when I was playing offense. But, it is fun anyway. Today it was 65 degrees ABOVE so I got to practice a little with the kids - I didn't stand a chance.

At this time of year we think of so many friends and family. The whole holiday season I wish I could get together with one of you - any of you! Is anyone going to be around our area for New Year's? We love you all and miss you even more - or vise versa. May the spirit of Christ feel your homes and your hearts!
1 comment:

Elder Gene R. Cook has been a personal hero to me since my mission in Bilbao Spain. He was then a councilor in the area presidency to President Dieter F. Uchtdorf, and I believe the only Spanish speaker in the presidency. As a result, I remember multiple mission conferences he presided over. I still read and re-read some of the notes I took during the conferences. I count them as gems of wisdom from a faithful man. One example is when he told us that whenever you stick-up for the truth, some people will hate you for it, but others will embrace it because of you. I have found this to be so true over the years. After my mission I compiled my notes and various talks into what I titled The Cook Book. His insights on faith and families have been a blessing to me and my family.

I was saddened when he received emeritus status in the October 2007 General Conference, but suspected it was due to health. In 2005 he said this in a devotional at BYU, "All of my adult life I have suffered with very difficult health problems, some of which have been life-threatening. What lessons were taught in the process of all those years! I believe they could not have been learned any other way. They have helped me to be more Christ like. Truly the Lord knows the end from the beginning and will tutor, correct, mold, and even refine you in the furnace of affliction. He will do so until He has accomplished His purposes in purifying you, sanctifying you, and helping you draw closer to Him. These kinds of gifts from the Lord are not always easy to understand, but I count them as priceless gifts to me and my family."

Recently, while reading in the book Teachings of H. Verlan and Shirley H. Andersen, I discovered that my mother-in-law's uncle, H. Verlan Andersen served in the Area Presidency of the Mexico Central America Area as the first counselor under President Cook. Imagine realizing a connection (however so slight), with one of your favorite heroes and mentors. It is very exciting. I know a lot of people think me silly, but that's how I felt. I think a man needs to have heroes at any age. That's magic that one should never out grow.
No comments:

On Monday night we went to the Fairfield township municipal building along with the other Joy School families for a joint family home evening lesson. The children presented a nativity play. It was a lot of fun, but difficult to keep the older children from giggling as the funny mishaps occur when 4 and 5 year olds put on a play. 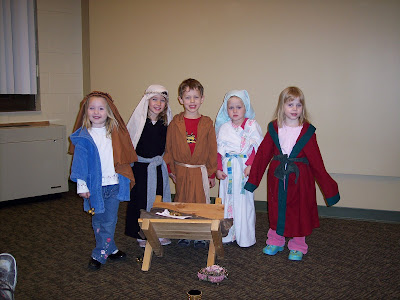 Spencer with his Joy School group performing the nativity. 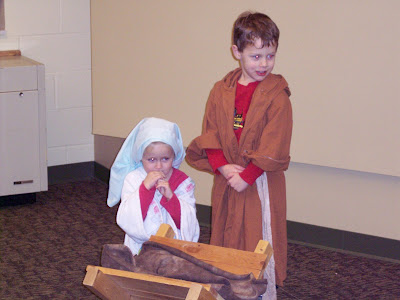 Joseph and Mary by the manger.